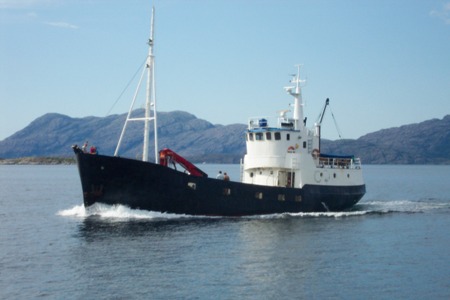 In June 2007, Fonnes Shipping AS purchased the wellboat/fish carrier MV «Kaura» from Viken Rederi AS, Roan, and renamed it MV «Skottningen» (its original name when it was bought from Germany to Norway in 1954.

«Skottningen» sailed many years along the Coast as a dry cargo «Coaster», but in 1994, it was rebuilt as a wellboat/fish carrier with a lot of changes done. Main engine was replaced, wheelhouse was replaced with a more modern one and the cargo derrick was replaced by a hydraulic crane.

Fonnes Shipping AS will rebuild the vessel again back to its original looks as it was in the 1950`s when it first came to Norway.

«Skottningen pictured in July 2007, just after we bought her